Time for a weekend away, a mini-break, destination: Berlin. Here are my 5 must-sees in the German capital.

1. Brandenburger Tor (Brandenburg Gate) – Modelled from the Athenian acropolis and topped with the Quadriga, this iconic symbol of Berlin was built as a monument to Prussian glory.

at the Brandenburger Tor 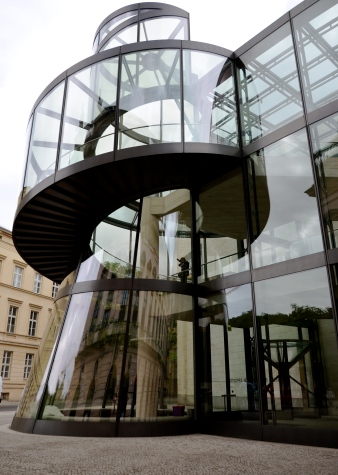 Berlin has over 170 museums and several are situated on Museumsinsel (Museum Island), a pretty area on a narrow island in the Spree River. Here are three more of Berlin’s must-see museums: Pergamonmuseum (Pergamon Museum) named for the Pergamon Alter (the monumental structure excavated in present-day Turkey was part of the acropolis of an ancient Greek city there), the museum’s collection of antiquities also includes the Ishtar Gate from Babylon. Alte Nationalgalerie (Old National Gallery) displays artwork of the German Masters and French Impressionists. The Jüdisches Museum (Jewish Museum) presents an unflinching look at Jewish history in a building resembling a shattered Star of David, designed by architect Daniel Libeskind.

3. Berliner Dom (Berlin Cathedral) – The Evangelical (Protestant-Reform) Church of Germany also located on Museum Island features an ornately decorated interior, including an elaborate alter, mosaics and sculptures, and a massive Sauer organ with 7,269 pipes (worth it to stay for service or visit for a concert). Don’t miss climbing to the top of the copper dome for beautiful views of the city. 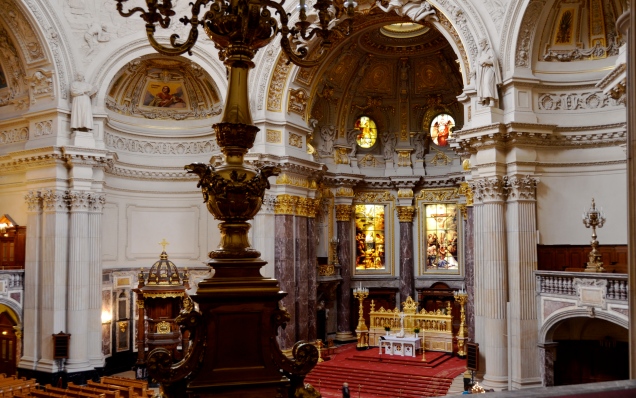 4. Schloss Charlottenburg (Charlottenburg Palace) – Originally named Lietzenburg after the area and renamed after the death of Queen Sophie Charlotte, Elector Friedrich III (Kaiser Frederick I of Prussia) built this palace as a summer residence for his wife. Walking through the richly-decorated rooms, accompanied by the free audio-guide, imagine royal life amid the largest collection of 18th-century French art outside of France. 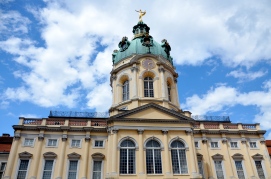 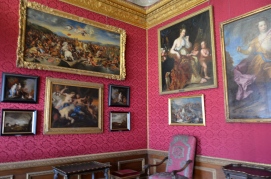 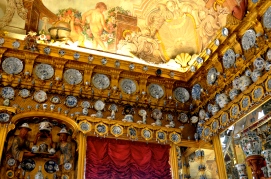 walls adorned from top to bottom with Japanese and Chinese porcelain

5. Die Berliner Mauer (the Berlin Wall) – Bernauer Strasse and East Side Gallery are the best places to see the symbolic remnant of the cold war that was once a 27 mile long (43.1 km) border between East and West Berlin. The total border length around West Berlin was 96 miles (155 km). On Bernauer Strassse you can see stretches of the wall, an observation tower, and the infamous “death strip.” At the East Side Gallery look at the colourful murals on the longest remaining section (0.8 miles/1.3 km).

at the East Side Gallery

Save your money to stay at the Hotel Adlon the address in Berlin located in the Mitte district and on the grand boulevard, Unter den Linden. From the glass cupola of the Reichstag, home of the German Parliament, take in vistas of the city. If you’re after more panoramic views, head to Fernsehturm television tower, the city’s largest structure (368 m/1207 feet), an icon of communist East Berlin. Next to the Fernsehturm, visit Marienkirche (St. Mary’s Church) one of Berlin’s oldest churches. On to Bebelplatz, once named Opernplatz (Opera Square) and renamed in 1947 in honour of social activist August Bebel, this large open square was the scene of the infamous Nazi book burning on 10th May 1933 when some 25,000 books were burned. Here, find the bronze memorial with Heinrich Heine’s quote, “Where they have burned books, they will end in burning human beings.” The imposing buildings around the square include Alte Bibliothek (Old Library), Altes Palais (Old Palace), Staatsoper Uniter den Linden (opera house), and St-Hedwigs-Kathedrale. Lastly, in the Kreuzberg district which is loaded with Turkish shops and cafés, discover a “Marianne” Stasse and Platz – it’s lovely. 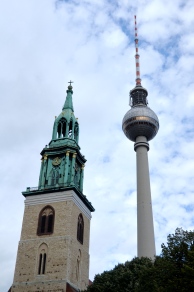 “Where they have burned books, they will end in burning human beings.” ― Heinrich Heine

To quote President John F. Kennedy’s inspiring speech from June 26, 1963, “Two thousand years ago, the proudest boast was ‘Civis Romanus sum’ ” [I am a citizen of Rome]. “Today, in the world of freedom, the proudest boast is ‘Ich bin ein Berliner!’ ”