Confessions of a delinquent travel writer.

I have been traveling a lot which is quite possibly the only marginally acceptable excuse for neglecting my writing. And confessions are appropriate, as this post recounts Vatican City and travels with my Mother.

Arriving in Rome, the Eternal City evokes memories of the past mingled with a present-day chaotic vibrancy that imprints on you every time you visit. However this trip was more Rome adjacent as my uber-Catholic Mother marshalled us on daily excursions to Vatican City, yes daily, and size does not matter to the smallest sovereign state in the world, the mighty HQ of Roman Catholicism.

St. Peter’s Square: The plaza directly in front of the basilica can hold crowds of up to 400,000 people. Designed by Gian Lorenzo Bernini to illustrate the extended arms of Mother Church embracing the world, at the centre of elliptical-shaped square is an Egyptian obelisk flanked by two granite fountains. The massive semi-circular Tuscan colonnades, formed by four rows of Doric columns that optically converge into one when viewed from the foci (look for the marble disks in the cobblestones), are testament to Bernini’s architectural and geometric wizardry. The sculptor and his students also created 140 statues of popes, martyrs, evangelists and other religious figures that stand on top of the plaza. Sense the grander, wealth and power of the Church if you enter from Via Della Conciliazione, the wide avenue running from the River Tiber to St Peter’s Square.

St. Peters Basilica: With capacity for 60,000 worshipers, the basilica is bursting with thousands of pieces of art, including Michelangelo’s Pietà and Bernini’s four-posted, solid bronze canopy over the main altar. You will not find a single painting though, only mosaics, images created by arranging tiny pieces of glass. For a 360 degree view of St. Peter’s Square and the city of Rome, climb the 551 steps to the top of the cupola (dome) designed by Michelangelo. Don’t forget to descend into the grottoes, the vast underground crypt housing tombs of many popes including John Paul II. 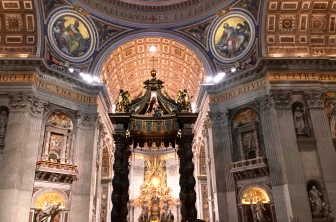 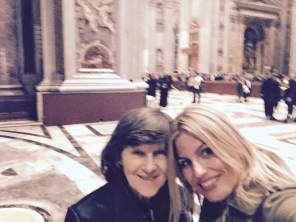 Of course my Mom wanted to attend Mass, offered at many alters in the basilica, and celebrated in various languages including Latin. We opted for an Italian mass at the Alter of Saint Joseph.

The Vatican Museum: The museum is enormous with plenty to offer lovers of art, sculpture and history – Egyptian mummies, Etruscan bronzes, classical statuary and modern paintings. The collection is displayed in 54 galleries and along ornate hallways and corridors. Do not miss the Gallery of Maps with 40 topographical maps of Italy showcasing the art of cartography, or Raphael’s frescos, commissioned as wall decoration for the Papal Apartments, particularly the School of Athens depicting the greatest thinkers of antiquity. And then the Sistine Chapel, home to Creation ceiling and the Last Judgement altar wall, where the College of Cardinals gather and new Popes are made. Personally I prefer landscape art and nature scenes but a few man-made achievements you must see with your own eyes. Whether you label it genetic-genius or God-given talent, the frescoes of Renaissance master Michelangelo that adorn the Sistine Chapel make that list. 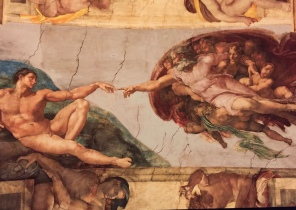 Creation (no photos in the Chapel, this is a postcard)

Pope Francis: Assuming the Pope is in residence, visitors may opt for Sunday’s Papal Blessing or Wednesday’s Papal Audience, both are free although the later requires tickets. On Pope-day, enter the Square with match-level security, anticipation heightens, chanting begins, “Padre! Padre!” until, from his private apartment, the curtains flutter and the Pope emerges. He opens with a greeting in multiple languages, and upon hearing your own “good morning,” more frenzied cheering. Hysteria befitting a pop star, the Holy Father carries on in Italian with the crowd drinking in every word, until he closes with the Angelus prayer and a blessing. You do not need to be Catholic to appreciate the experience, although if you are devout like my Mother, you may go delirious with joy.

waiting for the Pope

Where to stay: One of the best hotels in Rome, Hassler Roma is located at the top of the Spanish Steps offering luxurious accommodations, 5-star service, beautiful rooftop views and a Michelin-star restaurant, Imago. Your own inner sanctum in the heart of the city; I do not want to stay anywhere else.

We did manage one evening stroll around Rome, and the obligatory coin into Trevi Fountain to ensure our return.

drinks in the lounge, Hassler Hotel 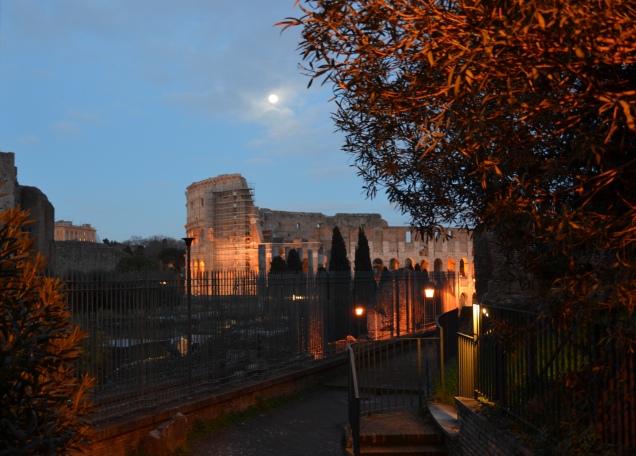 moonlight over the Colosseum

That’s all for now, Ciao!

Oh yes! That was my answer when I was invited to a friend’s weeklong milestone-birthday celebration at a Tuscan villa. Although I have been to Italy numerous times over the years, I’d never been to Tuscany. Despite my love of all things Italian from coffee and pasta to art and history, in my recent travels I have exchanged Europe’s accessibility for more exotic far eastern locales. Still you would be crazy to decline a week in Tuscany, touted as one of the most beautifully romantic and vibrantly picturesque places on earth.

To describe the landscape of the region break out the adjectives, add a generous helping of superlatives and you have the loveliest-quaint-bucolic-most serene Tuscan countryside. Cypress trees, vineyards and olive groves dance along the rolling hills and intermittently scattered along the vast tracks of fertile fields are charming towns which provide endless potential for day-tripping adventures. While Florence is as marvelous as Pisa is infamous, Lucca, Volterra, Siena, San Gimignano and many, many more are well-worth a sojourn.

Another local pursuit is winery-hopping, the Italian version of a pub crawl, and each vineyard has its own unique history, barrel methodology and tasting choices. You may not know your Brunello di Montalcino from your Vino di Nobile di Montepulciano but touring the wineries is a master class in the Sangiovese grape and the art of the vine. Some of the most interesting were Castello Banfi l’Enoteca ~ a castle in a gorgeous location with lovely people and delicious wine; Casato Prime Donne ~ despite being a traditionally male dominated profession, the winemakers here are all women and this vineyard produces bottles of Cenerentola or “Cinderella;” Villa Le Corti ~ wine is literally on tap but unfortunately the proprietress-owner is a most unpleasant Duchess; Fattoria Corzano e Paterno ~ Arianna and her family run this vineyard, farm and working dairy which produces artisanal sheep cheeses making tastings especially scrumptious; Antinori’s Badia di Passignano ~ in the Chianti Classico region, barrels here are aged in the property’s 4th century monastery and you should not miss an exquisite dinner with wine pairings at Osteria di Passignano.

After a day’s indulgence you need somewhere to lay your head. Accommodation options in Tuscany are plentiful but if you are traveling with friends why not rent a villa; for roughly $12K per week you can stay at Enzo and Annagloria Corti’s spectacular Villa Torre Il Santo located in Tavernelle in Val di Pesa. Ah, la dolce vita.

dinner at the villa 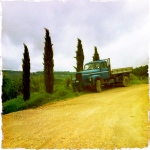 Prior to a holiday in the Italian countryside, I opted for a few days in the eternally everything city of Rome. Not my first rodeo on the city’s tourist track, I elected to visit some quintessential sites along the well-trodden Appian before scouting the local haunts.

First on the must-see-again list is Vatican City. Regardless of your religious preference, spending a few pleasurable hours seeking out the Masters’ works in painting and sculpture should not be missed. Beauty emanates throughout the museum’s ornate hallways from mosaic floors to gilded ceilings.

Post-art intoxication, pick a neighbourhood to explore like trendy Tridente. Enjoy a gelato whilst window shopping for the latest fashions on display in the area’s designer boutiques.

Meander down the stylish Via Condotti towards the crowd-filled Spanish Steps. As evening descends unwind with cocktails and a view at the Hi-Res bar in Hotel Valadier, which could compete with the best of L.A.’s see-and-be-scene. Prosecco darling?

Before you leave, remember to toss a few coins in Trevi fountain. It’s a must. Oh Rome, you are a feast for my eyes and sweet nectar for my soul.