Easy to embark on city-break from London to Marrakech, flight time 3 hours 20 minutes.

However easy is a relative term when I travel with my Mother. Traveling together, I am the chief travel agent, procurement officer, tour-guide, day-planner, personal assistant and valet. My services include obtaining visas, arranging transfers and even packing luggage. Two responsibilities for my dear Mom, being ready on-time for departure and preparing her handbag of personal items. Getting a taxi from my house to Victoria Station was the first leg of our journey to Morocco. Minutes before we arrived to Victoria I asked, as more of an aside comment, “are your meds in your purse?” Blank stare. Reply, “no they are on your kitchen counter.” Although I believed we are over-prescribed in general on medications like Lipitor and Lisinopril, you can’t just stop cold turkey. So our lovely cab driver turned around and drove us back and forth. One hour and £100 later, we returned to Victoria, waited for an Express Train to Gatwick Airport and unsurprisingly missed the baggage drop deadline. British Airways could fly us the next day, but suggested booking online with Easy Jet. Moments later we were confirmed ticket holders for Easy Jet’s afternoon departure and had five hours to review the morning’s fiasco.

Me: We’re missing half a day in Marrakech.
Mother: Yes but this airport is so nice.
Me: I had to buy two one-way flights, plus the cab.
Mother: Who cares, it’s only money.
Me: Uh-huh, my money.
Mother. Exactly (cue cheeky smile). 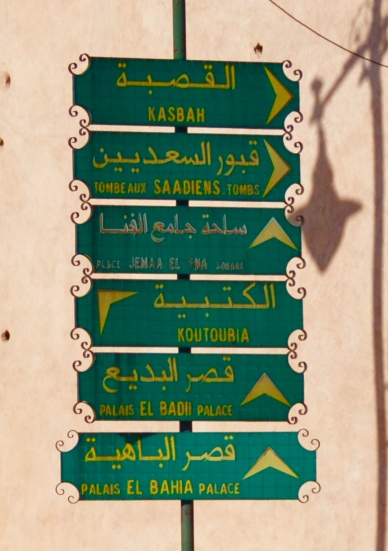 Also within the old city, or medina (meaning “town” in Arabic):

Plaza Djemaa El-Fna, a bustling open market by day that transforms into a hot-spot of restaurants and entertainment by night. Watch and experience true Moroccan life in this square which was declared a World Heritage Site by UNESCO. 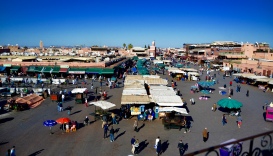 Koutoubia Mosque, named the “Booksellers’ Mosque” because manuscripts used to be sold around it. With its distinctive pink minaret, the mosque is the city’s oldest building dating from the 12th century. Like most mosques in Morocco, closed to non-Muslims. 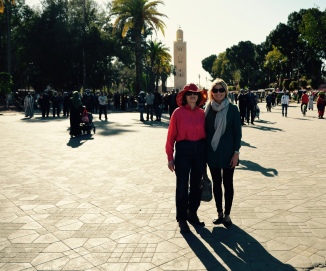 The Souk or marketplace, spread over narrow and winding alleys, is arranged by type of goods or crafts sold. Some specialities of Morocco include carpets, leather goods, slippers (babouches), Berber jewellery, decorative metal lanterns (known as fanous) and Argan oil. Argan trees only grow in southwestern Morocco, and the oil extracted from the olive-like fruit is used in beauty treatments and cooking.

As we were walking along the quiet back streets, we passed a couple entering the modest and inconspicuous door to their home. This French couple from Lyon lived in Morocco for five years, I know this because our French speaking Moroccan guide asked them if we could see inside their house. It was lovely with a fountain in the interior courtyard and vibrant blue and yellow floral design patterns. I can imagine if strangers invited themselves into my house in London! Hospitality in Morocco is a matter of tradition and honour which makes the country very welcoming to visitors.

From Marrakesh, you can trek the High Atlas Mountains or race across the Great Sahara. We choose a day-excursion to Asni, a Berber village near the Atlas Mountains just 60 kilometres south of Marrakesh. With your local Berber guide walk along the foothills among pine, oak, juniper trees and gaze at the mountain splendour. Mount Toubkal is the highest peak in the Atlas Mountains and in North Africa. Although the non-nomadic Berber tribes rely on agriculture, tourism also plays a large part in their micro-economy. We purchased a year’s supply of Argan oil products from a village shop where my Mom asked the shop assistant, using sign language, to use the ladies’ room. My Mother proceeded into the corner cubicle, closed the door and seconds later her head peaked out and her hand motioned for me to “come here!” No way. But I did, and I watched her negotiate the tiny empty room and contemplate the squat toilet, a ceramic ground-level opening with foot pedestals. “You’re going to need to hold my bag.” Always a shock those toilets, but she did great. Cue hand sanitizer. 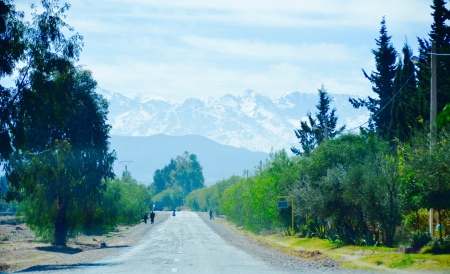 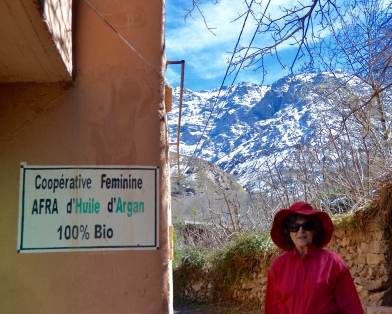 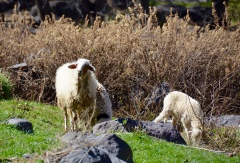 We rushed back to our car through the maze of vendors encouraging us to pause and bargain. As we breezed by a meat-seller’s stall, he was hanging slabs and flanks above a neatly arranged rows of chops. Bearing in mind Morocco is a primarily Muslim country, they don’t eat the pig. Randomly, as she trotted past, my Mom yells to this man, “is that pork”? Cue quizzical look.

On the drive back to Marrakesh, we stopped for lunch and traditional mint tea at the beautiful Kasbah Tamadot; many opt to stay longer at this hotel-oasis owned by Sir Richard Branson.

And so ended my Marrakesh weekend in Morocco, the diverse, fascinating and visually stunning country in the northwestern corner of Africa. Our journey home was blissfully uneventful.

“If you have only one day to spend in Morocco, spend it in Marrakesh.” ~ Winston Churchill