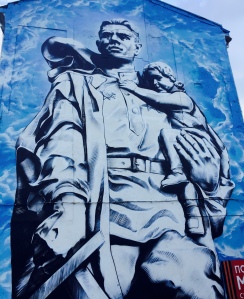 The Russian Federation, the world’s largest nation, is not the easiest or simplest destination. Exhibit One. You probably need a visa, that’s a pain. The application includes strange, although I am sure very important, questions like Do you have specialised skills relating to explosives, nuclear matter, biological or chemical substances. Really? What kind of traveler says yes to that. You must also obtain an invitation (known as a visa support letter) and once you arrive you must register your visa within 7 days, fortunately most hotels will do this for you. Exhibit Two. We (the West) are fighting and posturing with Mother Russia in various overt and subtle ways. The Director of America’s CIA (Central Intelligence Agency), John Brennan, has recently said, ”Russia is a country that will pursue its national interests frequently to the detriment of the interests of the peoples of the countries wherein it operates.” Couldn’t the same be said of Western countries protecting their own national interests or justifying actions “in the interest of national security.” Fine I’ll say it, President Vladimir Putin is a bully. But to quote the Oracle from Matrix Re-Loaded: What do all men with power want? More power. Personally, I doubt President Putin is angling for world domination, and former Empires and leaders in the Free World should probably consider, fact and absolute truth are a matter of perspective. Exhibit Three. The challenges of trying to learn and decipher the Cyrillic alphabet plus Russians are not known for exuding welcoming warmth, and Muscovites in the country’s capital are no exception.

Difficulties aside, Moscow is a paradoxically just-like and the exact opposite of any European capital-city and appealing to connoisseurs of history, culture and avant-garde entertainment:

The Kremlin: Once the citadel of Tsars and the former headquarters of the Soviet Union, the fortified complex is the current residence of the Russian President. Inside the walled gates and towers, find sprawling grounds, Palaces where affairs of state are held and beautiful churches around Cathedral Square each one uniquely and richly decorated with stunning frescoes and iconostasis of prophets and angels. The Tsars of Russia were crowned here. The State Armoury Museum houses the imperial collection of decorative and applied art. Walk through time as you contemplate Fabergé eggs and royal regalia like majestic carriages, crowns, thrones and dresses of the aristocracy. In the dazzling rooms of the State Diamond Fund vast arrays of jewelled treasures including the Orlov Diamond taken from an Indian temple that adorns the sceptre of Catherine the Great and the massive Shah Diamond. 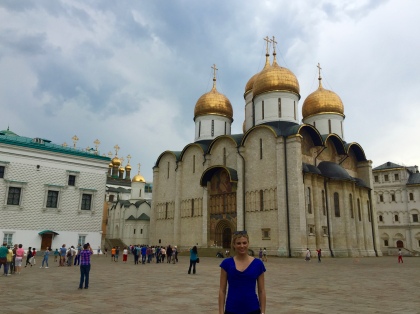 Cathedral of the Assumption, Kremlin

Cathedral of the Archangel, Kremlin

Cathedral of the Annunciation, Kremlin

Red Square: The immense plaza adjacent to the Kremlin, its name does not refer to Communism; the word for red in Russian is krasnyy which once meant beautiful. Enter through Resurrection Gate to experience the majestic public arena – home to Kazan Cathedral, Russia’s largest department store, Gosudarstvennyy universalnyy magazin abbreviated to ГУМ or GUM lavishly decorated with marble floors and a glass-roof showcasing high-end boutiques, the colourful onion domes and stunning interiors of St. Basil’s Cathedral, the Lenin Mausoleum enshrining the embalmed body of the first Soviet leader, Vladimir Lenin, with nearby graves of Joseph Stalin and Leonid Brezhnev along the Kremlin wall and the State Historical Museum.

Arbatskaya District: This district derives its name from a Mongol word “Arbat” meaning suburb. Moscow has more than 80 museums, the Pushkin State Museum of Fine Arts in Arbatskaya displays pieces from antiquity to 19th century. Pop next door to unexpected gem, the Gallery of 19th and 20th Century European and American Art if you fancy a bit of Van Gogh, Renoir, Cézanne, Gauguin, Matisse or Picasso. On the northern bank of the Moskva River, Cathedral of Christ The Saviour is the tallest Orthodox Christian church in the world with massive iconic interiors and enchanting views of the city from the gilded dome.

courtyard, Cathedral of Christ The Saviour

Tverskaya District: On the grand shopping boulevard Tverskaya Ulitsa, reminiscent of Fifth Avenue, check out the famous grocery store at No. 14, Yeliseyevsky Food Hall, to satisfy your caviar wishes and vodka dreams beneath the ornate chandeliers and stained glass windows. Attend a performance at the famous Bolshoi opera house and ballet stages. Nikolai Rimsky-Korsakov’s opera “The Tsar’s Bride” is based on Ivan the Terrible and other historical figures; spoiler alert, everyone dies, or goes crazy or goes to prison. Harsh and un-optimistic, yet mesmerizing which sort of sums up Russia. Post-theatre, dine like an aristocrat at Café Pushkin, serving traditional Russian dishes in an elegant 18th century mansion.

Bolshoi, Apollo in the Chariot of the Sun

Bolshoi, at the opera

Whether or not you know your Romanovs from your Bolsheviks, Russian history is fascinating and complex. Oppression, revolution, empires and Oligarchs; part depressing, part romantic, and perhaps why Russia remains difficult yet intriguing and captivating. 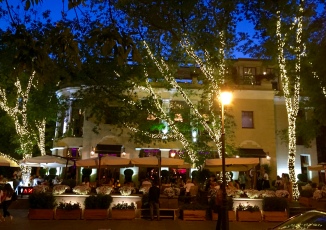