I’d vote for India to be the next global super-power and will explain why but first let me share my adventures in Mumbai.

Having done my research and being amply prepared for India immediately assaulting my senses upon arrival, I discovered Mumbai has palpable energy like many metropolises however my senses weren’t attacked. Outside the new, ultra-modern international airport, only my ears rang slightly with what would become a constant, familiar drone of car horns and congested traffic. Mumbai is a sprawling city, western, traditional, crowded, cultural with rich people and many, many poor. My self-made itinerary included tradition tourist attractions from the Gateway of India to Malabar Hill, glamorous Bollywood, packed commuter trains, and the famed dabbawallas (tiffin-carriers). A tour of Dharavi now-infamous courtesy of Slumdog Millionaire, Asia’s largest slum has a million people living in the confined space of two square kilometers contrasted with the lavish 27-storey residence of Indian billionaire Mr. Mukesh Ambani with 600 staff members looking after the family of six.

My personal Mumbai highlight reel goes like this. Within hours I was ripped off by a taxi driver. I was prepared for this. Ready to negotiate. However being slightly lost and starting to wander in circles and after asking several drivers to take me to “Queens Road” which I’m sure is South Mumbai’s equivalent to 5th Avenue or Rodeo Drive. Never-mind the blank stares and horizontal shaking heads, I was getting agitated and somewhat desperate, not an ideal combination for the barter system. Finally I had a taxi and when the price was negotiated from Rs100 to Rs200—wait that’s not negotiation, I said okay anyway. At least he was kind enough to tell me about his life, wife and two little girls, and he thanked me and wished me well. After buying silks, a sari, and three salwaar kameez suits which I may only have occasion to wear by crashing Sikh weddings in London, I braced myself for the journey back to the hotel. Going to the Taj carrying shopping bags from Kala Niketan and Roop Kala I was ready to make my donation to the universal taxi-driver-tourist-trust-fund. Instead this driver metered the trip and the journey cost a mere 23 rupee or roughly .30 pence. You never know and should never assume who is going to cheat you. I’m not complaining since my first taxi cost all of £2.50 it’s just an 800% mark-up demonstrates a keen awareness of laissez-faire economics.

The Taj Mahal Palace & Tower Hotel is a bubble of luxury and can boast the most invitingly comfortable, cloud-like bed and pillows, ever. Tearing myself away from high-tea at the blissfully colonial Palace Lounge, I was off to Elephanta Caves, a Unesco World Heritage Site, located an hour boat ride from Apollo Bunder on Gharapuri Island. After a long, uphill souvenir and snack-stall-lined climb, you can wander through the caves housing Hindu stone sculptures dating from the 7th century. Here I learned if you cannot be a Bollywood star in India, consider being a blonde. Indian tourists from east Gujarat to West Bengal were asking to take pictures with me, honestly, I was handed a baby at one point. I wasn’t special, all fair-haired tourists were photo-fair-game. I am curious to know what people will write in their photo albums; mine says “now could you take one for me – me with Punjabi table-tennis champ.”

My next project was to solve the mystery of Chhatrapati Shivaji; when the train station, international and domestic airports, museum, various roads, and publics buildings are re-named in your honour either you are important or someone is determined to confuse visitors. Turns out this 17th century Maratha warrior king is the adopted patron of Shiv Sena, the contemporary militant Hindu party responsible for the revisions and for his statues across the city. Shiv Sena also renamed Mumbai after a local deity in the mid-90s. What is in a name after-all. Many locals still refer to their city as Bombay and despite death to the memory of colonialism, the national sport of cricket and the institution of afternoon tea seem safe.

Busy day transformed into frenetic night. Mumbai nightlife is like any other uber-cool-trendy city; restaurants, music, cocktails, and clubs. One of my favourite evenings started at the Taj’s Harbour Bar with their signature drink, from the harbour since 1933, and ended at the Taj many hours later at Wasabi by Morimoto after Rs11,130 worth of sake and sushi flown fresh from Japan. Akin to having a curry in Italy, yet truthfully it was better quality fish than I’ve had in London despite costing the equivalent of two months local salary.

Everyone I met had a story, a perspective about the vast contrasts in Mumbai. Wealth and opulence, 5-star hotels and wine-bars juxtaposition to dirty, poverty-stricken streets without the courtesy of a progressive-gradual transition of neighbourhoods. One of my new friends remarked “I’ll always be poor” in spite of what appeared to be a lucrative career in hospitality. His wife’s inability to speak English, one of many keys to mobility, meant she could never get a good job. He went to on to educate me about the Bangladeshi slums where migrant numbers are ever-increasing for a chance in the city of dreams—how bad must it be in Bangladesh. When I suggested that he was better off than those living in Dharavi, he surprisingly said many residents there work and have bank accounts and probably would have more money to leave their children than he would. Curious. Vanita, another local resident and veteran tour-guide, and I discussed everything from Ghandhi to the price of petrol. She explained how the Tata Motor group manufactures the Nano, a tiny car costing just £2000.00; literally the world’s cheapest car but with petrol costing 65 rupee a litre, nearly UK prices, who can own a car? Such is the plight of the emerging middles class. When I asked Vanita, is it a bit brazen being driven on a city-safari in our air-conditioned sedan. She replied your life is your life. Why should anyone living out their karma, trying to live a good life, feel guilt or envy of another? It wasn’t really a question.

Like most things of significance the situation in India is complex. From my vast knowledge after spending three days in Mumbai, here is my perspective. Assuming the Eurozone can’t recover, fourteen trillion in debt is just too much for America to overcome, and I had to choose India versus China as the next power giant, I’d choose the former. First India is now the world’s largest democracy so albeit the governance rather corrupt, it’s familiar. Hindi is the official national language, however English is widely spoken and undoubtedly the language of commerce and the intelligencia. Without population control policy, 500 million of the billion plus Indian populace are under the age of 25. All factors key in world domination. India has excellent intangibles too like generosity and kindness of its people that apparently exists without envy. An incredible work ethic with many people working 12 to 15 hour days, six days a week; hard-working, modest, and humble are revered qualities. India is 80% Hindu, a religion renowned for tolerance; if your religion can’t get along with the Hindus (and you know who you are) then you need to have a long talk with your religion.

The barriers for India include the not so minor points of wide-spread illiteracy, extreme corruption, social inequality, and under-reported regional conflicts but every neophyte power has problems. Still if Mumbai exemplifies the microcosm of the country, superpowerdom is coming soon. 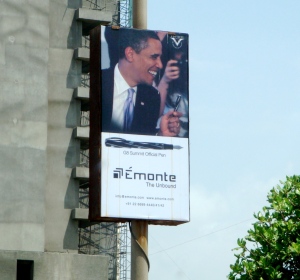 3 comments on “By any other name, dreams of Bombay – Passage to India P1”